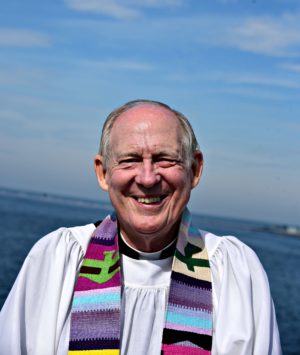 From 2015 through 2019, Peter was the sole Chaplain and shared the pulpit with two or three distinguished guest clergy leaders each summer. Beginning this summer, he will be at St. Ann’s for the first 8 weeks of the season, and Luis Leon (below) will serve for the last 7 weeks.

Peter’s career has been primarily in education and leadership development. He is inspired by his ancestor, 19th century abolitionist Frederick W. Gunn, whose spirit of inclusiveness, open inquiry and concern for the freedom and welfare of others shaped Peter’s sense of vocation as a servant leader. Peter has had extensive training and experience as a clinical counselor – with particular emphasis on the adolescent journey – and as a consultant in mediation and conflict resolution.

Among his various posts, Peter served as Chaplain, Counselor and Director of Admissions at St. Paul’s School in Concord, New Hampshire, and from 1998-2007 as Director of the National Association of Episcopal Schools headquartered in New York City. Along with his ministry at St. Ann’s, Peter serves as an executive coach for the Heads and Boards of independent/private schools. From October through May, he lives with his wife, Kiki, and their rescue pup, Josie, in Tucson, Arizona.

Much to the dismay of many friends and parishioners, Peter is a long-time New York Yankees fan. 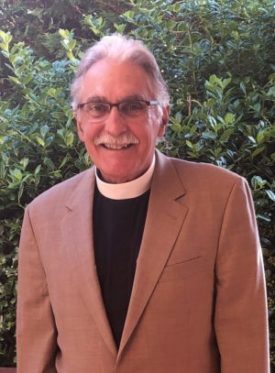 The Rev. Luis Leon retired as Rector of St. John’s Church Lafayette Square in Washington, DC in 2018 after 24 years of service. His specialty was building inner city parishes through spiritual leadership, preaching, and outreach that involved parish members in community service. Luis was nationally sought after to teach courses in parish building and stewardship.

Luis began his spiritual journey when he was baptized into the Episcopal Church in Guantánamo, Cuba. In 1961, he came to the United States as part of the “Peter Pan” flights out of Cuba, joining thousands of children whose parents, at that time in history, feared for their future in Cuba. Luis was 11 years old when he arrived in the U.S., and was supported by the Episcopal Church in Miami.

Luis and his wife, Lu, have two grown children, Emilia and Sofia. Luis is an avid Baltimore Orioles fan and, when working, never lived more than a day’s trip from Camden Yards.

St. Ann’s has been fortunate to have eminent leaders serve as Chaplain. The very first was The Rev. George J. Prescott.

In 1985, Fr. Bruner began to share services with The Rt. Rev. John Maury Allin, 23rd Presiding Bishop of the Episcopal Church. Bishop Allin was then Chaplain-in-Charge until 1995.

In 2002, The Rev. Dr. Peter G. Cheney began sharing services with Dean Agnew, and continued to do that until 2015 when he became the sole Chaplain at St. Ann’s.